Nnunu Bomolemo Ramogotsi is a Singer, Composer, Arranger, Afro-Jazz Artist, and Awards-Winning artist who has an inner resources for contemporary African traditional jazz music. The Diva was recently nominated as the Best Female Artist from Southern Africa in the Africa Magazine Awards; Afrimma 2016 in Dallas, Texas, USA.

Nnunu was born in the district of Ramotswa, in Botswana. She is the second and last born from a Christian family. Today she has the reputation for being a Diva of Afro-Jazz Music in Botswana and in the Southern Africa region. 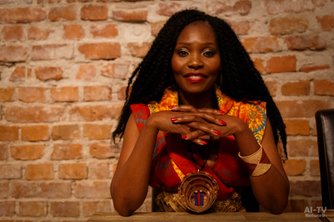 Nnunu Bomolemo Ramogotsi started singing in church when she was very young. She became interested in music and continued singing in the church choir until she finished her secondary education. She later joined a choir called Kgalemang Tumediso Motsetse (KTM). She was a soloist at that time in the choir. Her performance in KTM was admirable and she was spotted out from the group by the conductor of the choir group, late Gomolemo T. Motswaledi who she still calls her mentor even though he passed away years back. Motswaledi as she said was the one who introduced her to contemporary African Jazz Music. Nnunu sang as a back-up vocalist for many popular Jazz artists like late Duncan Senyatso, Ndingo Jowha, Socca Moruakgom, Hugh Masekela, Oliver Mtukuzi, and Mama Dorothy Masuku. She sang as a back-up vocalist for more than ten years and with almost all the Big Jazz Musicians in Botswana. Singing as a back-up vocalist for all this time she said was like training for her. During this period, she learned song writing, recording in the studio while also focused on Jazz music. She became confident in working with Jazz Musicians after this period. Nnunu choose to play jazz music because she thought that with the genre of music fancier and can be performed at venues with high level dignitaries and there is more pride of being a jazz musician.

In 2012, she produced her first album called Mmasonoko. In the album she worked with the lead singer Jean-Michel Byron. The reason she invited and worked with Jean-Michel in Botswana was that she wanted her music to have some international feelings, but with her original African Beats. Through the success of this album, she was nominated in four different categories; Best Album in 2012, Best Female Artist 2012, Best Package Album 2012, and Best Afro-Jazz Artist 2012 by the Botswana Music Awards. The video clip from Mmasonoko was nominated in the category, Best Video of the Year at the 8th Annual Bamu Music Awards, 2016.

She was also nominated as Best Female Artist from Southern Africa in the Africa Magazine Awards, Afrimma 2016 Dallas Texas USA. She was the only female artist from Botswana who was nominated for this precious award. She told us that the nomination came as a shock to her and she believes the nomination will be a boost her career. She said 'I will not be surprised if I don't win, but I will be very surprised if I actually win'.

She emerged as the winner of the Best Album and Best Female Artist of the year 2012 in Botswana. These nominations and awards made her more famous and she was invited in different European countries where she began her international tours.

Her video clip titled Mmasonoko from her first album also won the Best Video of the Year at the 8th Annual Bamu Music Awards, 2016.

In 2015, she and some top musicians formed a band in Botswana called Re-Botswana Music Ensemble. The band is composed of highly talented and famous musician in Botswana. The members of the band are; Lister Boleseng, Ndingo Johwa, Lekofi Sejeso, Nnunu, Leroy Nyoni, Andrew Chinganga, Kopano Mantswe, Chedza Majwabe and Sakie Nonong. This band was formed because the artists wanted their colleagues from Botswana to get some international experiences. The band came to Sweden and performed during the Botswana Independence day, did some workshops in Kulturama Stockholm and in Goteborg. The band also visited Sweden and they peformed at the African Jazz Club in Stockholm. Nnunu told us that the reasons the band is visiting Sweden was because of the kind of reception they get, how welcoming people are in Sweden, and they bring other artists from Botswana to get similar experiences 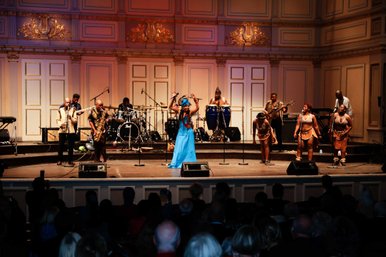 Nnunu got connected with Pablo Donaldo, Hanssen, Anna Kristofferson all from Sweden when they visited Botswana in 2012. This group went to Botswana as a cultural exchange program where musicians learn from each other, organize workshops and festivals. This was a breakthrough for her to learn new things from other musicians.

In 2013, she was invited by Pablo and Anna Carrin Stenbeck to visit Sweden for the first time and to play with other musicians. While in Sweden, she found the like of Thomas Castro, a guitarist, met Pablo Donaldo as well with whom they performed at the Botswana Embassy in Stockholm. They also performed at Fashing Jazz Club and in Sodertalje, Stockholm. During her stay in Sweden she organized some workshops where she though people about Botswana’s Culture, music, food, singing and dance at Kulturama a Swedish cultural center in Stockholm.

In 2014, she visited Sweden again yet with another musical band from Botswana called the Botswana Trio. The band was composed of Nnunu Bomolemo Ramogotsi, Africa's Jewel, Shanti-Lo and Kearoma Rantao. They sang at the Botswana Independence Day at the Botswana Embassy here in Stockholm, did some workshops at Kulturama in Stockholm. The group also traveled and performed in different cities in Germany where they also organized workshops about Botswana’s culture before heading back to Botswana.

which she thinks is very important and to share their music with people from Sweden. She plans to visit Sweden and to bring other artists from Botswana to get the same experience as her in the future and also for Swedish Jazz artists to visit Botswana and to keep the relation and exchange program updated.

Nnunu Bomolemo Ramogotsi is an Afro-Jazz Diva, energetic, hard working and a star to admire with an amazing voice. She wishes to do more in the traditional Bostwana music and Jazz music in general.

You can watch our videos of her performing in Stockholm with her band at Botswana Independence Day 2015 at Musikalista.