AI-TV met with and interviewed the Sweden based, Zimbabwean artist ManLuckerz from ManLuckerz and The Zim Traditional Unity (ZIMTU). Watch the video with some clips of musical perfromance from the album Mai na Baba Molly.

ManLuckerz Makandire Luckson Chezhira Chikutu popularly known from his artist name as ManLuckerz was born in Mpandawana, in the province of Masvingo, Zimbabwe. He grew up in a small village setting where he acquired much of his experience from living with his mother Agnes Mahachi Chikutu. 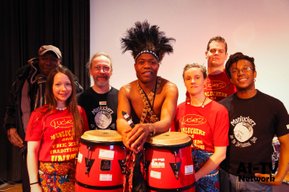 When he was still growing up in Mpandawana, his mother taught him how to sing, dance, and play traditional music instruments. She also thought him how to use both the instruments and the musical tones to express emotions and feelings. ManLuckerz also received some inspiration for music from his grandfather Makandire Chikutu, who was a musician, traditional healer, and a story teller. The inspirations ManLukerz got from both his mother and grandfather motivated to spread his wings on to the traditional and contemporary music world. A combination of his self-interest  in singing, song writing, play traditional instruments such as drums, Mbira, thumb piano, dance and stage performances gave him more experiences in the traditional music and stage performance. He then began to play drums, sing  and performe in different places in Zimbabwe.

Comming to Sweden, Manlukerz continued his performances and his genre of music, being a traditional and contemporary style with the expressions he makes during his performances, attracted quite a lot of attention from the Swedes. He became so popular that many organisations started inviting him to perform, teach music and druming in different places in Sweden.

Today he is the founder of ‘ManLuckerz And The Zim-Traditional Unity’ (ZIMTU) that is based in Uppsala, Sweden. The members of his band are from Sweden, Uganda, Zimbabwe, Mozambique, and Gambia-Senegal. The genre of music he produces tends to portray certain issues that can’t be openly discussed back in Zimbabwe.

The band has performed in different countries like the United States. In Sweden the band has performed in places like Kulturhuset in Stockholm, Concert Hall in Uppsala, Southern Theatre, Jameson Pub, Maishagalan, Katalin, Berns Bistro Hijazz, at festivals in various countries, Sofia Gala in Järna, Weeffect Org Bio Rio, Swedish church, the Ethnographic Museum in Stockholm, Music schools, libraries and other.

ManLuckerz and the Zim-Traditional Unity recenty  perfromanced in Uppsala and he is promoting his new album titled 'Mai na Baba Molly'. You can contact him directly if you wish to know their programme or wish to buy his music.