Manifestation against racial profiling by Police and Security Guards in Sweden. 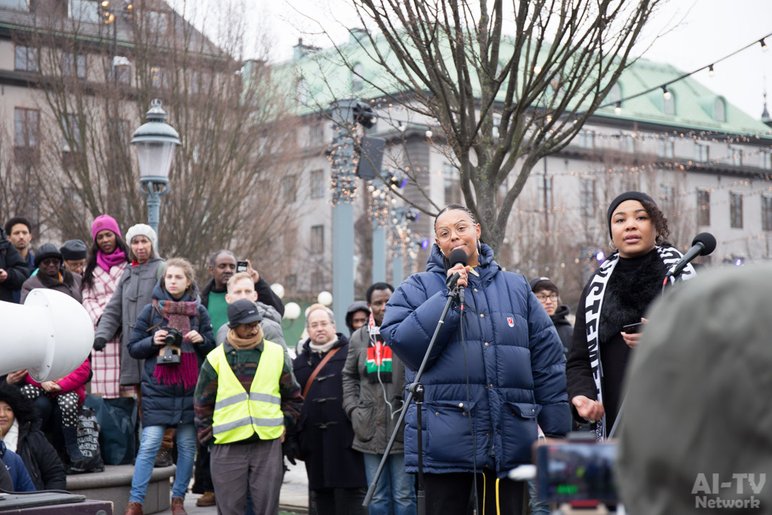 One of such videos that shocked the public vividly revealed a twelve-year-old boy being brutally molested by a number of security guards at a public library in Kista, a neighborhood in Stockholm. Not long after, another video surfaced, this time of a heavily pregnant woman (eight months) being overpowered, forcefully dragged on the floor, in front of her (approximately six-year-old) daughter, out of the subway in central Stockholm. Both videos sparked an outrage over the treatment of black people in Sweden.. 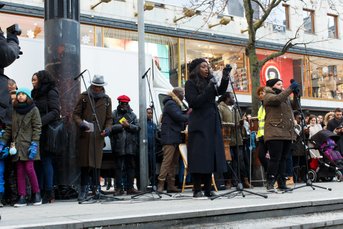 Lovette Jallow, (Photo on the left taken from one of her manifestations) who is known for publicly condemning such cruel acts, posted the second video clip on her network.

Lovette wrote that she wasn’t surprised by the inhumane act meted on the eight-month-old pregnant woman.

For Lovette, such an act is probably the result of institutionalized racial profiling, to which non-white Swedes are all too often subjected.

Call for Demonstration in Stockholm, Malmö and Göteborg

Thousands of people gathered in the central of Stockholm, Kungsträgården to demonstrate and show their discontent with these barbaric acts by the police and security guards in what they described as a form of structural racism and racial profiling.

During the Stockholm demonstration, one of the organizers and speaker, Amie Bramme Sey, from Africans In Sweden (AFRIS) sited some resent incidents of police and security guards brutalizing mostly people of non-Swedish backgrounds on the subway stations around Stockholm which was also allied to racial profiling and other forms of institutionalized racial discrimination.

The event was attended by thousands of sympathizers, civil society activists, political party groups and people who came to share their different stories on how they are treated by the police and security guards. The demonstration was graced with a live performance by a band called Riot Samba.

Here are some of the photos from the event in Kungsträgården, Stockholm, Sweden