For the past few months, Cameroon has been hit by a series of protests in the Anglophone regions of Bamenda and Buea. Lawyers, teachers, university students as well as civilians massively took the streets to show their frustration and dissatisfaction with the Francophone system of goverment.

In respond to this demonstrations, armed police who were deployed to calm down the situation peacefully instead they turned and brutalized the unarmed protesters with water cannons, live bullets and some were shot. Their action caused lots of panic and some fatalities. The protest turned violent and it is now spreading to the different towns around the English speaking regions.

These demonstrations have now spread in many different countries in Europe, Asia and America as the Diasporas are showing deep concern about the situation back in their country, support for their siblings and the love for their country.

In Stockholm, Sweden, a similar demonstration was organized by Cameroonians who strongly believes there is no functional government in Cameroon.

They went to demonstrate their grievances, frustration and dissatisfaction with the way those from the English speacking region of Bamenda and Buea are treated by the Francophone system of governing Cameroon. The event took place at their former colonial master's Embassy (British Embassy) in Stockholm, Sweden.

During the demonstration, the protesters explained some of the reasons why they were out on the streets to protest, the present situation of the police killing innocent civilians and how they Anglophones are treated in their country by the Francophone system of government.

At the end of the demonstration, the protesters handed in a memo to the British Embassy and requested an answer from Britain within a few weeks. 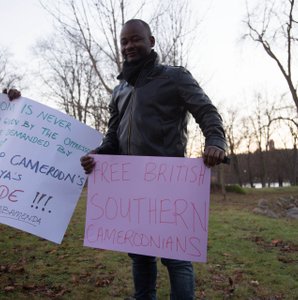 AI-TV Network spoke with a number of demonstrators who expressed their deep sadness on the current situation back home and demands of their own from the government. Some asked for federation while others strongly insisted on complete cessations from the French speaking Cameroonians to a country on its own (The Southern Cameroon).

The protesters continued their demonstration from the British Embassy through the streets in central Stockholm with placards carrying different messages and pictures.

It was a peaceful demonstration and the protesters were accompanied by the Swedish police.

We will keep you updated immidiately when we get more stories from Africa.