A CNN footage showing African migrants being sold as slaves in Libya has prompted worldwide protests from the black community condemning slave trade. Fleeing varied problems in their home countries, men, women and children from sub-Saharan Africa, undertake a dangerous journey through the Mediterranean to reach the West. However, as the EU throws millions of Euro at Libya to stem off illegal migration to Europe, these on-the-run black Africans are caught, caged and auctioned like chicken in Libya, to whoever wants to buy and own them. This inhumane act has been condoned and sanctioned by the silence of the West (including the EU and the US), the South (including the AU and African governments), as well as the media, all of whom simply look on.

In Stockholm, demonstrations were organized by Lovette Jallow, who started the facebook group Black Vogue and who also authored the book with the same name. The Lovette-led protest took place at the heart of the city’s main square, Sergels Storg, and gathered hundreds of protesters carrying placards in solidarity to those who are either in jail, working as slaves, or undergoing torture in Libya. Among others, placard inscriptions contained wordings such as; ‘We are not Slaves’, ‘anti blackness is the root of racism’ etc. 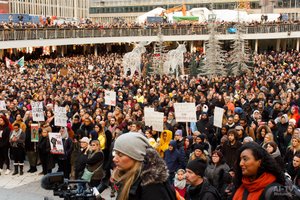 The past few weeks have recorded massive demonstrations in some European countries by blacks, who condemn both the shocking and terrifying slavery act, and the passivity of the world, the media and Heads of States. In Sweden, demonstrations took place in the cities of Stockholm, Uppsala, Jönköping, Malmö, Goteborg, Örebrö, and Linköping.

Calling on everyone to get engaged in the anti-slavery fight, Lovette asserted that “This is a human rights issue”. “Don’t thank me because I am the organizer, this is what you all need to do. We are in this together”, she insisted.

In reference to the silence of the world, Lovette warned that such acts of human depravity will ultimately turn back to haunt us all.