An annual event aimed at commemorating the naissance of the Organization of Africa Unity, which is today branded as the Africa Union, the AU has become a worldwide event. Each year all African Diplomatic Mission abroad honor and memorialize the day during the month of May. The main aims being to reminisce the actual founding date, the 25th of May 1963 at Adis Ababa in Ethiopia. This year, 2019 marks the 56th anniversary of the Africa Day.

In Sweden, the event is usually organized by all the African Embassies in Stockholm headed by the Dean. This year the celebration took place on the 23rd of May 2019 at the Historical Museum in Stockholm, Sweden.  The theme for this year’s celebration was “2019 Year of Refugees, Returnees and Internally Displaced Persons in Africa: Towards Durable Solutions to Forced Displacement in Africa”.

The celebration in Stockholm was an opportunity for the diplomatic mission to share some special moments with themselves, the Swedish government officials, those interested in Africa affairs as well as a Guest of Honor.

The 2019 ceremony brought together all the African Head of Mission, their staffs members of the Swedish government, a Guest Speaker, persons from private and non-governmental institutions, African Traditional dance groups as well as individual invitees from different works of life who joined their friends to celebrate this day. The day was marked by speeches from the Dean of African Ambassadors, the Guest of Honor, a segment showcasing the various Embassies who were part of organizing the event, traditional dances, traditional buffet provided by the different countries (Embassies) present in Stockholm. 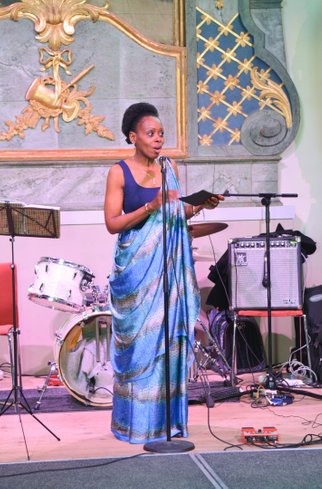 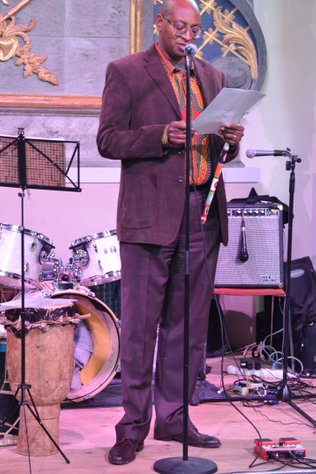 Before the speeches, the Swedish National Anthem was played, followed by those of the African Union.

She was also responsible of keeping the agenda of the ceremony and  ensured that all the items of the day was flowing as smoothly as possible.

The Dean of Ambassadors, H. E. Dr Joseph Sang, Ambassador of Kenya in Stockholm gave a welcome speech at the begining of the ceremony.

The second speech was from the State Secretary for International Development Cooperation Hon. Per Olsson Fridh. He was also the Guest of Honor from the Swedish government.

Happy Africa Day. On behalf of the African Heads of Mission, the Dean of Ambassadors, H. E. Dr Joseph Sang, Ambassador of Kenya in Stockholm, welcomed everyone who was present at the event. In his welcome speech the Ambassador the day (Africa Day) provides an opportunity (for Africans) to reflect on the love of the continent (Africa), its identity, achievements and commitments to success.

Origin of the day. The Dean of Ambassadors added that the day’s origin could be traced back to 15th April 1958 when the first conference of African independent states was held in Accra Ghana. The conference brought together the founding fathers of Africa’s liberation movements he added.

At that time he said there were very few independent states (in Africa) and their leaders used this as a platform to reject colonialism and to find a common interest (for the continent). This meeting (conference) he said therefore sowed the seeds of what would become the Organization of Africa Unity (OAU). On 21st May 1963 he added that African history was made when the executives of thirty-two newly independent African States and their leaders met in Addis Ababa to establish the Organization of Africa Unity the OAU. Since then, he added that the 25th of May has been a day celebrated around the world to signify Africa’s identity and unity. Further on the Dean said in his speech that on the 9th of July 2002 at a meeting of African leaders in South Africa, the African Union, the AU was born which replaced the Organization of Africa Unity OAU. Today, he added that the African Union is committed to promoting African growth and economic development by championing inclusion, increase cooperation and integration of African states.

Theme of this year’s celebration. H.E the Dean said in his speech that this year’s (2019) celebration of Africa day was under the theme ‘‘Refugees, Returnees and Internally Displaced Persons in Africa: Towards Durable Solutions to Forced Displacement in Africa”. He added that the continent (Africa) has over the past years seen a large percentage of its population migrating to different parts of the world. The Dean said an estimate of about 14million Africans have been internally displaced due to conflicts and economic deprivation. He added that as many as 6 millions of these migrants (Africans) are displaced by conflict in the continent. In his speech the Dean added that Africa through the AU and other economic bodies are committed to strengthening the political structures in the continent to prevent further conflicts (and to reduce these migration flows).

The Ambassador added that the AU has recently adopted the African agenda on migration which proposes and approach based national policies, sub-regional coordination and international partnerships which suppose a paradigm shift, a redefinition of migration based on an introspective and positive approach as well as a real political will of the states. He said the AU has an interest in ensuring that migration is carried out in a safe legal orderly and humane manner. For the AU, migration should be a choice which is on the one hand breaking the stereotype of African migrants. The Dean added that the AU has agreed to set up the African Migratory Observatory in Morocco with a mandate to develop observation, research and the exchange of information amongst African countries. The intention of this organization he added was to control migration.

Quoting on what their host country is doing, the Dean said Sweden has been (and is still) an important partner at ensuring that Africans feel safe at home and has been supporting lots of African developmental programs. He added that African countries will recall full memories and the advent of Swedish experts and their funding during independence of the individual countries. He said Sweden has also received large number of immigrants who have been integrated into the Swedish communities as African Swedes (afro-Swedes). Africa will always appreciate the commitments he added that Sweden has shown towards the warfare of Africans. The Dean further said we (Africans) are grateful to the government of Sweden for the long standing friendship, cooperation and support.

Vote of thanks. H.E the Dean also extended his warm thanks to the museum management team for having provided a venue that the Africa day celebration took place, an appreciation to all those who have worked hard to ensure the success of the event. He added that he owed the success of the event to his colleagues, the African Heads of Mission for providing leadership at all stage.

Concluding remarks. In conclusion, the Ambassador asked everyone to remain united in pursuit of the African dream embedded in the agenda 2063 of the AU.

State Secretary for International Development Cooperation Hon. Per Olsson Fridh attended the 2019 Africa Day as Guest of Honor from the Swedish government. 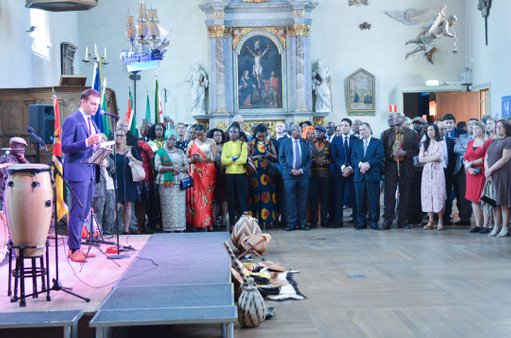 The Guest of Honor, for this year’s celebration was the Swedish State Secretary, Per Olsson Fridh, who came to represent the Swedish Government during the ceremony. In his welcome speech Per Olsson said he is honor and as his first time to attend the celebration (Africa Day), a celebration of Africa Unity, solidarity and the Africa Union itself, he added.

Per Olsson said to the audience that as ‘we’ all are aware of the Swedish partnership and friendship African, its states and citizens are one of the highest priorities for the Swedish government.

This of course was to strengthen ties between Sweden and Africa he added.

Africa Day is a day to celebrate culture and the richness of African society. Culture holds a fantastic toolkit for transformation and together (renowned) African artists have made a strong impact on shaping, revitalizing and reflecting realities in the continent (Africa). Another example of a creative Swedish African cooperation, he said, was the Swedish furniture giant Ikea’s move to recruit ten young designers from around the continent to combine these creativity and expressiveness of African designers makes the world even smaller.

Per Olsson talked also about the theme of the year’s celebration being ‘‘Refugees, Returnees and Internally Displaced Persons in Africa: Towards Durable Solutions to Forced Displacement in Africa”. He added that this is very important issuer and a clear example of where we (The Swedish government and Africa) need a joint solution. He said over 68 million people around the world find themselves displaced, many fleeing from conflicts, natural disasters and the scarcities of resources often related to climate change. He added that Africa has shown their openness generosity and pan African solidarity for receiving a proportion of these migrants. He also quoted that one of the Swedish ministers in Mozambique to show Swedish solidarity to those who were affected by the cyclone.

To address Sweden’s long term challenges (to Africa), Per Olsson said ‘we’ (both Africa and Sweden) need to mobilize all available resources, and in mind with the Africa Europe alliances on sustainable investments, one of Sweden’s goals for the coming three years he added that will be to complement Sweden’s development cooperation with further broadening their (Sweden’s) relations with African countries, strengthening economic ties, increasing trade relations and creating a more equal partnership.

In his concluding remarks, Per Olsson congratulated the African free trade agreements and said if every African country joins it is expected to be one of the world’s largest single markets that will count trillions of USD and hope that this will result in trade between Africa and Europe.

Per Olsson also thanked the African diplomatic corps for organizing the event, the active African Diaspora for bringing their cultural entertainments.

During the 2019 Africa day, the following traditional dance groups were present.

Celso Paco & Kuvumbana. The traditional dance group with group leader Celso Packo, who is also a multi-instrumentalist (traditional instruments), folk song singer as well as a story teller from Mozambique.

The group got their inspiration from different dances in the southern African region. Performing during Africa day, the group showed their different talents, styles related to South African Zulu dance plus those of Swaziland with violent shouts and chorography by the dancers.

Dekula band: The musical band group that was also present this year was Dekula Band with band leader Alain Dekula Kahanga, popularly known as Maestro Voumbi Dekula. It's composed of a wide variety of members originated from Tanzania to Uganda, Congo Brazzaville, Angola, and Kenya. At the ceremony the band played Soukous, African rumba, Salsa and Jazz music and the audience were pleased with their live performance 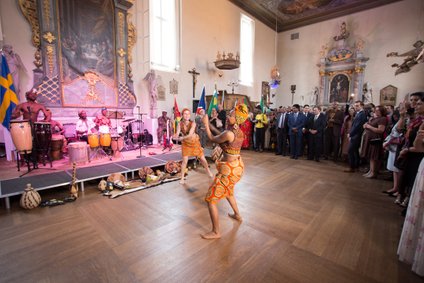 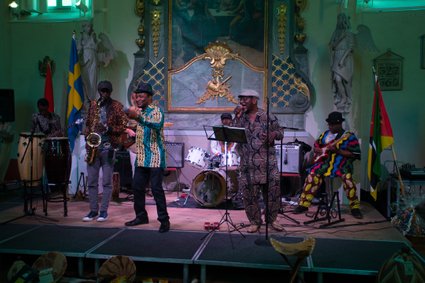 At the end of the ceremony, we got these tweets from  the Dean of Ambassadors, H. E. Dr Joseph Sang, Ambassador of Kenya in Stockholm:

Great evening with the #StateSecretaryfor #InternationalDevelopmentCooperation Hon. Per Olsson Fridh, who underlined #Sweden’s commitment to being a close partner to #Africa and the #AfricaUnion #AfricaDaySweden2019.

It was a successful Africa Day celebration event last evening.
Thanks to our Guest of Honor, State Secretary Per Olsson Fridh, the honorable guests, representatives & officials of the Swedish Government, Ambassadors, friends of Africa,...etc, 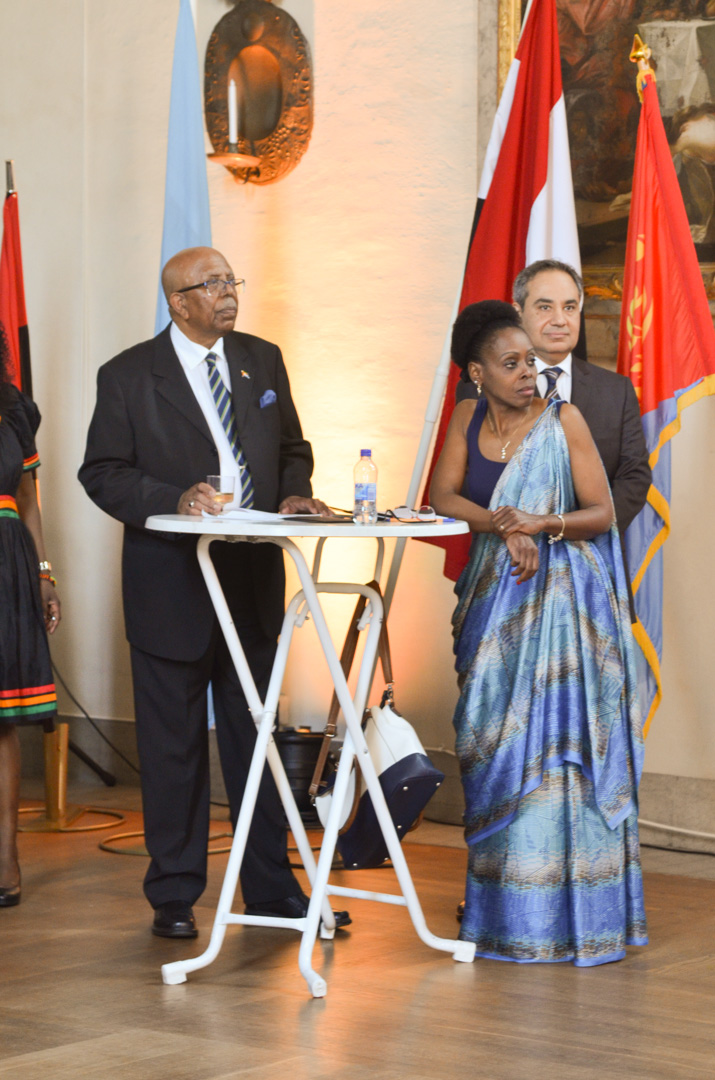 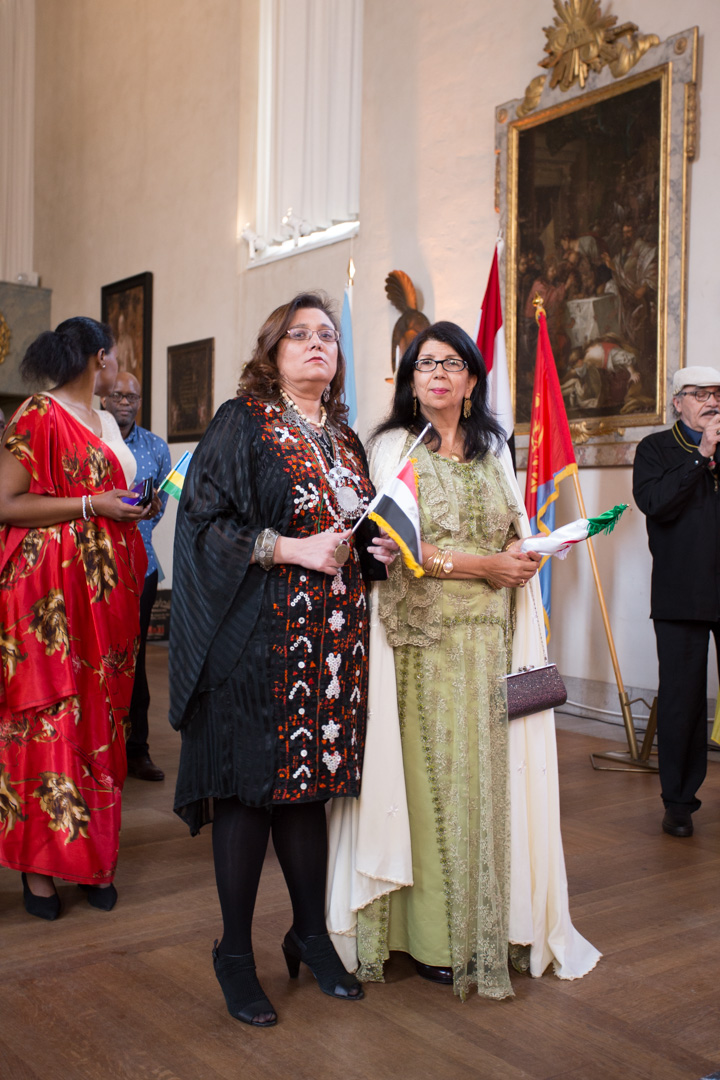 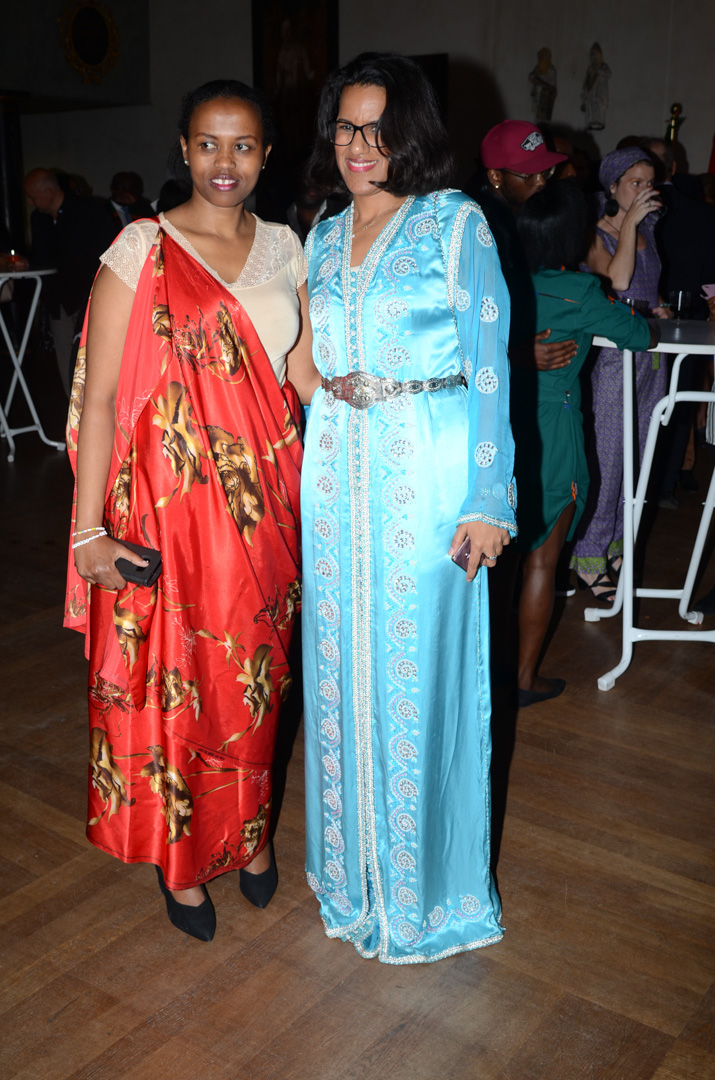 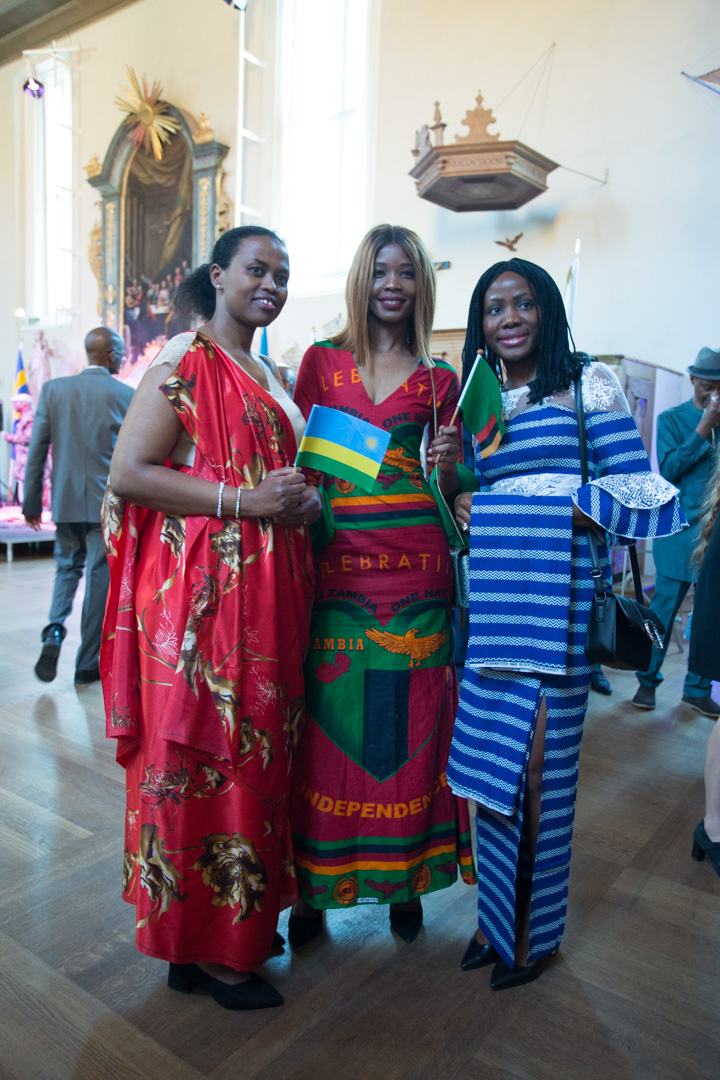 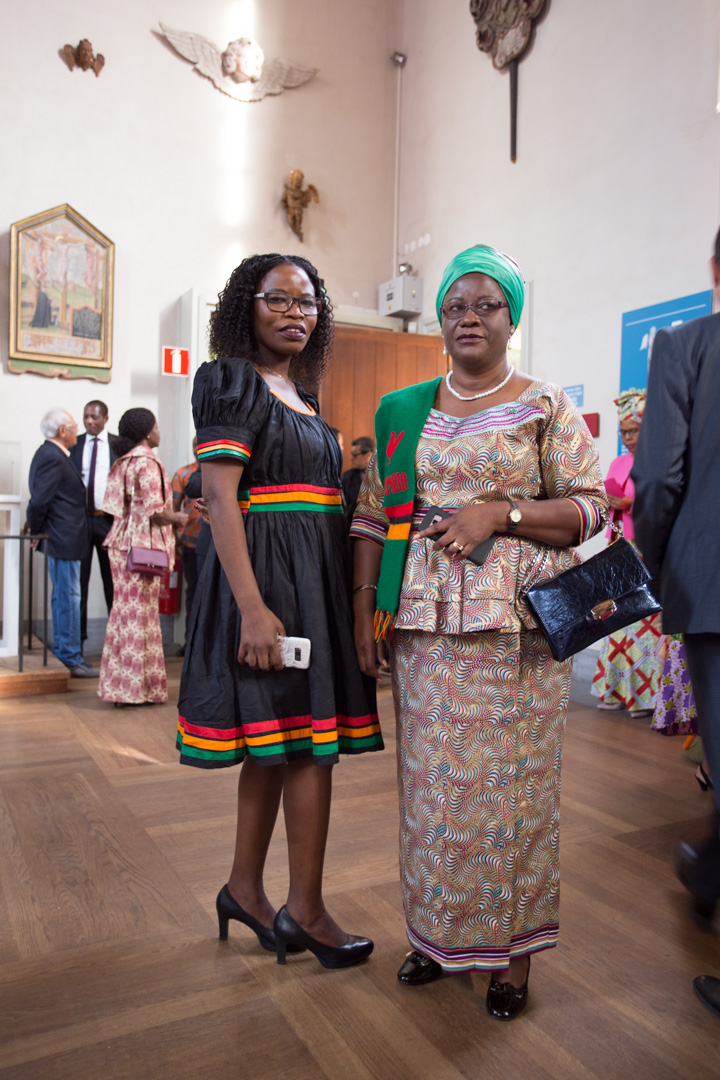 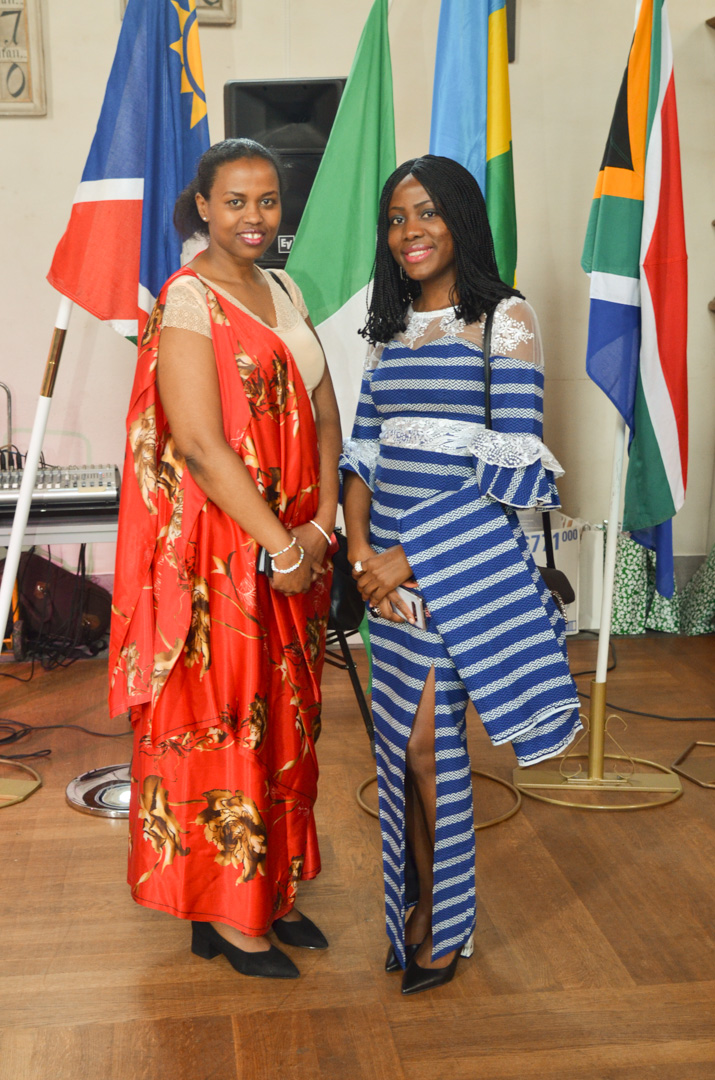 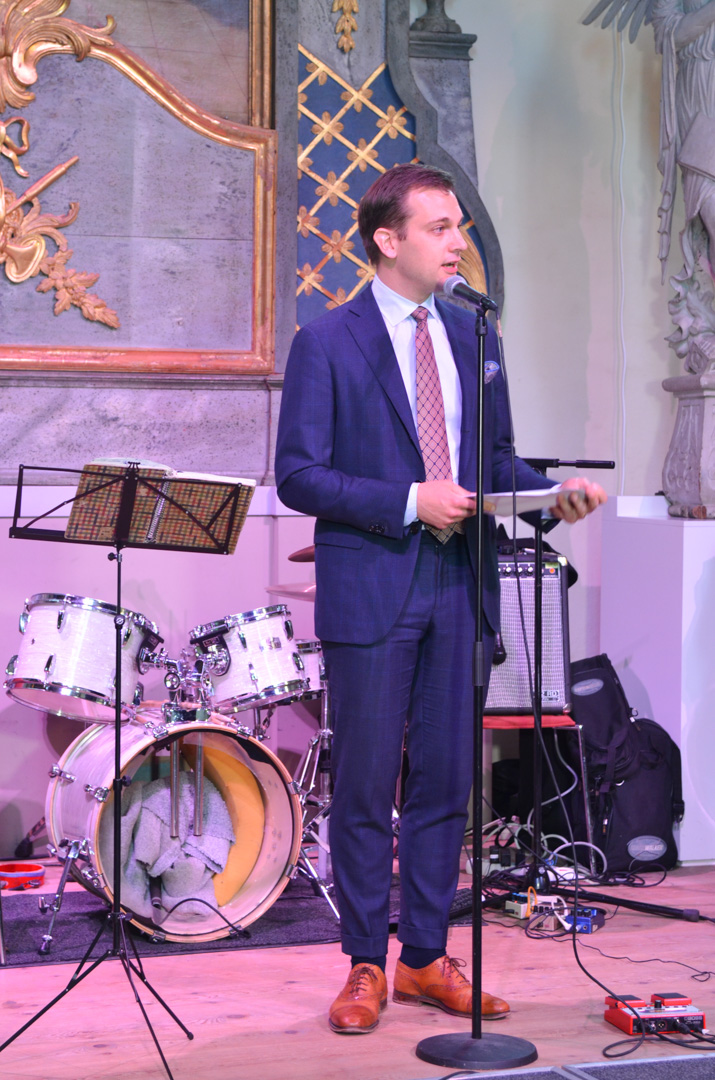 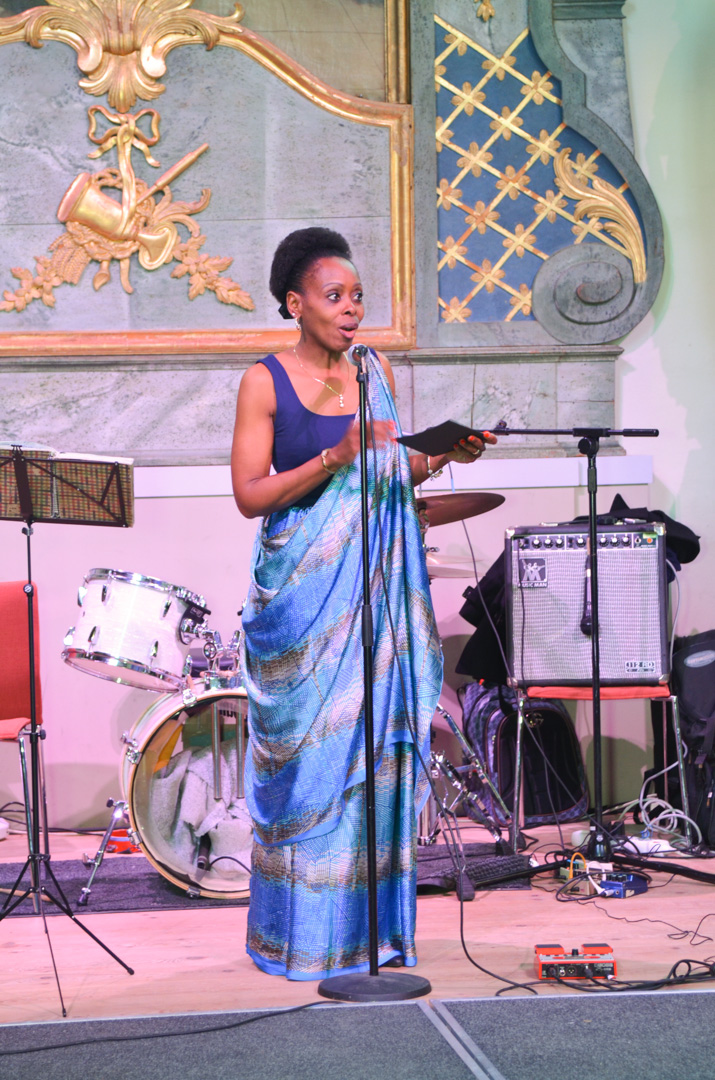 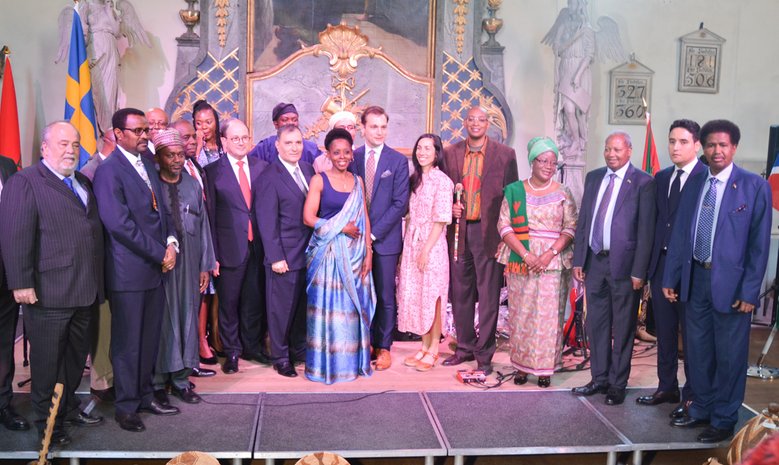