For over 40 years, Western Sahara has been in a disputed conflict and occupied by the Moroccan authorities.

A panel discussion about the future of the conflict was organized by the Social Democratic Party and the Green Party in Sweden. Other interest groups who co-organized the panel were Emmaus Stockholm, Olof Palme Center, Afrikagrupperna, and other solidarity organizations in Sweden. The event took place at the Swedish Parliament in the presence of some Swedish MPs, politicians and the audience included some people from Morocco and other African countries.

Speaking at the panel were activists: Aminatou Haidar, Senia Bachir and Rabab Amidane, originally from Western Sahara. They presented 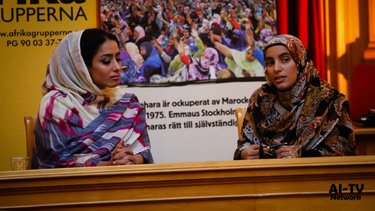 their personal stories and experiences about what they went through in Western Sahara, the present situation of the people back in their country and the bizarre treatment the country is receiving from the Moroccan authorities to the audience.

During the event, an unknown person from the audience tried to disrupt the panelists but the rowdiness was calmed down and the person was escorted out of the seminar by security.

About 200 people were present at the parliament during the discussion and below are some of the photos from the seminar.