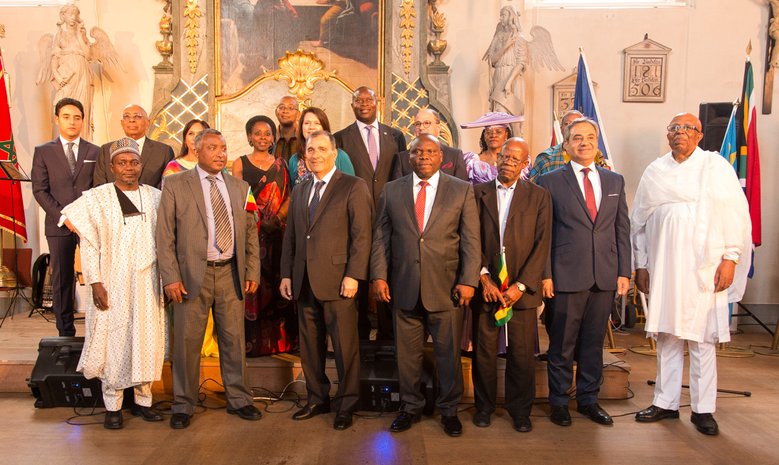 On the 25th May 1963, Africa made history when they founded the Organization of Africa Unity (OAU) which is today known as the Africa Union (AU). The day is today known as the ‘Africa Day’ and for many years now it has become an annual event which is celebrated worldwide. The month of May is set aside by all the member states of the Africa Union in remembrance of the actual date and different themes are chosen each year by the Diplomatic Missions at home in Africa and abroad to honor this day.

In Sweden the event is annually organized by a collective of all the Embassies of the African continent in Stockholm and lead by the Dean of the African Group of Ambassadors in Stockholm, Sweden. This year the celebration marking the 55th anniversary took place on the 24th of May 2018 at the Historical Museum (Historiska museet) in Stockholm.

The theme for this year’s celebration was "Winning the fight against corruption: A sustainable path to Africa's transformation".

The ceremony brought together all the African Diplomatic Head of Mission in Sweden, Embassy staffs, members of the Swedish government, a guest speaker, heads of educational institutions interested in African affairs, non-governmental organizations, traditional African musicians as well as individuals from different works of life who joined to celebrate the day. The day was marked by speeches from the Dean of African Ambassadors in Sweden followed by the invited guest speaker. The ceremony was graced with live traditional dance performances from Morocco, Rwanda and Congo. 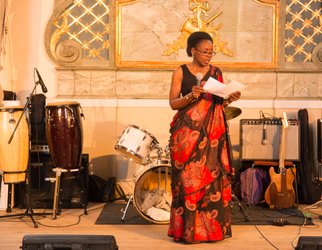 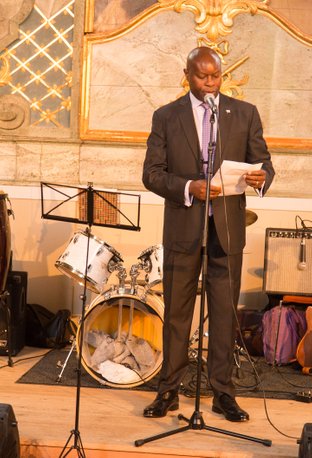 Before the speeches, the Swedish National Anthem was played, followed by those of the African Union.

She was also responsible of keeping the agenda of the ceremony and  ensured that all the items of the day was flowing as smoothly as possible.

An opening speech was given by the Dean of the Group of African Heads of Mission in Sweden, H.E. Mr.  Lameck Nthekela, Ambassador of the Republic of Botswana on behalf of all accredited African Embassies in Sweden.

In his speech he said the African Union has transformed the continent, brought unity, collaboration, common understanding, resolve as well as responsive solutions to the problems and challenges faced by the people. He added in his speech that the continent continues to speak with one voice in issues such related to climate change, international trade and the global justice system. Continuing his speech the Ambassador said the continent is more stable politically and they have made tremendous economic development.

The Dean also said that although the continent has made some relevant progress, they still face some challenges such as corruption and illicit financial flow. On behalf of all the Diplomatic Head of Missions in Sweden, and as the Dean of the African Group of Ambassadors, he said he will like to reiterate their commitment to the AU on agenda 2063 and the UNSDG no.16 on corruption.

On to trade, the Ambassador mentioned the continental free trade area agreement that has been signed by many African countries, African economic community related to free movements of persons, right of residence and establishments and the single air transport market. All these he said were to ensure an integrated Africa with a collective mind and soul in moving forwards to address the challenges facing its people.

Ending his speech the ambassador, said their host country Sweden was a true friend to Africa. The Ambassador said through the Swedish development agency, twelve countries and two regional blocks had entered into beneficial collaboration with the Swedish government. He said such collaboration will also be a tool in strengthening institutions and also to fight against corruption in the continent. Furthermore he said Sweden being a non-permanent member of the UN Security Council, they plays a key role in collaborating with the AU with respect to peace and security at the UN.

H.E. Mrs. Ann Linde, Minister for EU Affairs and Trade attended the 2018 Africa Day as Guest of Honor from the Swedish government.

The minister said in advancing a common ground with the EU-AU during the 2017 brought an impressive number of European and African Heads of states to strengthen and deeper the   two (EU-AU) partnerships’. And as for Sweden she said the Prime Minister Stefan Löfven attended the summit and adopted a join political declaration which outlined four strategic areas for the partnership between Sweden and the African Union member states.

The political declarations were; economic opportunities for the youths, peace and security, mobility and migration and cooperation of governance. 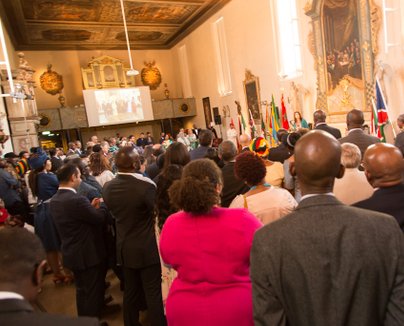 She also congratulated the AU and its member states to last year’s Kigali decision of the 21st March 2018 when forty-four African countries signed an agreement on the Africa continental free trade area which she said was a positive step and also hoping that this free trade area will increase trade between Europe and Africa building on the European Africa partnership agreement.

The minister said the theme for the 2018 Africa day "Winning the fight against corruption: A sustainable path to Africa's transformation" was crucial. She said Sweden is ready to join all efforts to curb corruption, to enable promotion of democratic governance, social economic transformation as well as sustainable economic growth.

Her concluding remarks were that ‘Sweden and their partnership with Africa is strong and runs deep’ therefore let us all (both Sweden and Africa) give mutual efforts to broader our relationship by enhancing our ties.

During the 2018 Africa day, the following traditional dance groups were present. The ‘Mark Marrakech’ band from Morocco, Inganzo Cultural Dance Trope, A group of Rwandan Women Association in Sweden and Dekula Band from Congo. They all showed their different cultural dance and rhythms during the event 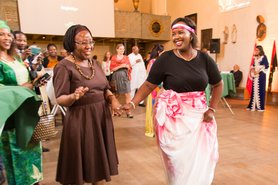 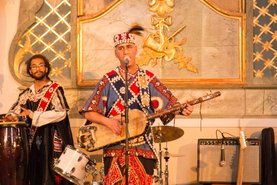 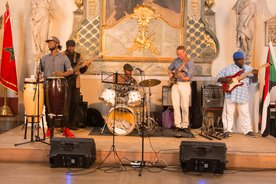 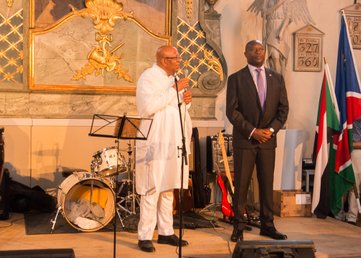 At the end of the ceremony, a closing remark was given by H.E. Yonas Manna, Charge d'Affaires, Representing Eritrea in the Nordic Countries.

In his speech, he thanked the Guest of honor and all the invited guests who attended the celebration. He also extended his thanks to all the Heads of Mission and their staffs who were very generous in organizing the event and also appreciated the staffs of the historiska museet for offering the venue where the event took place. 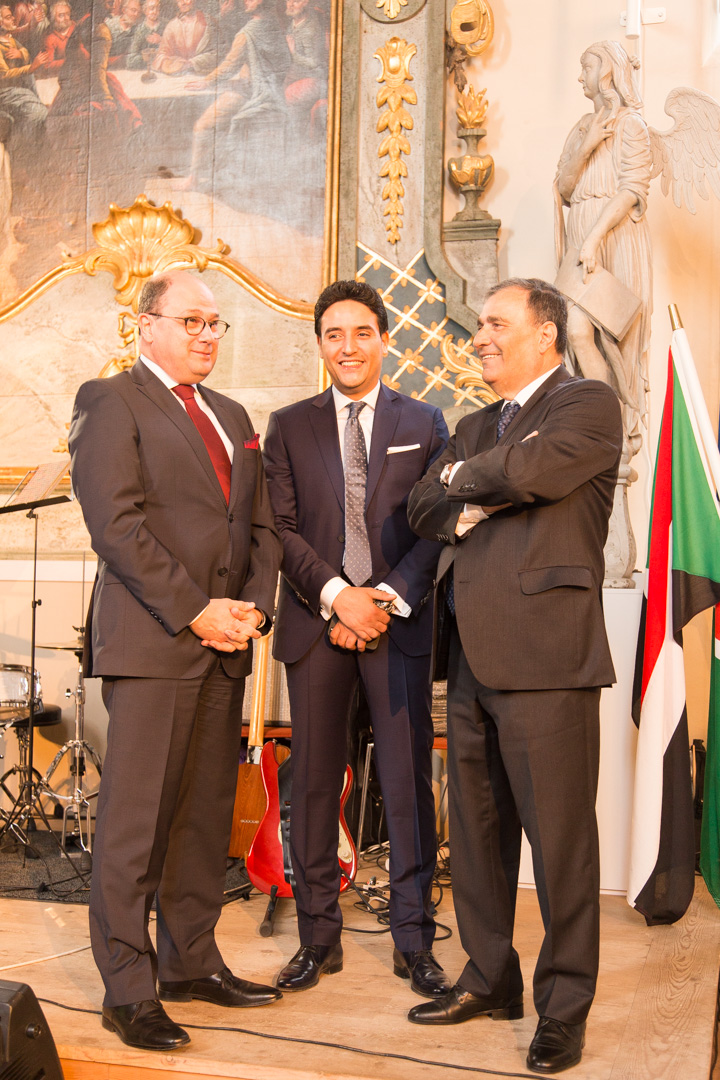 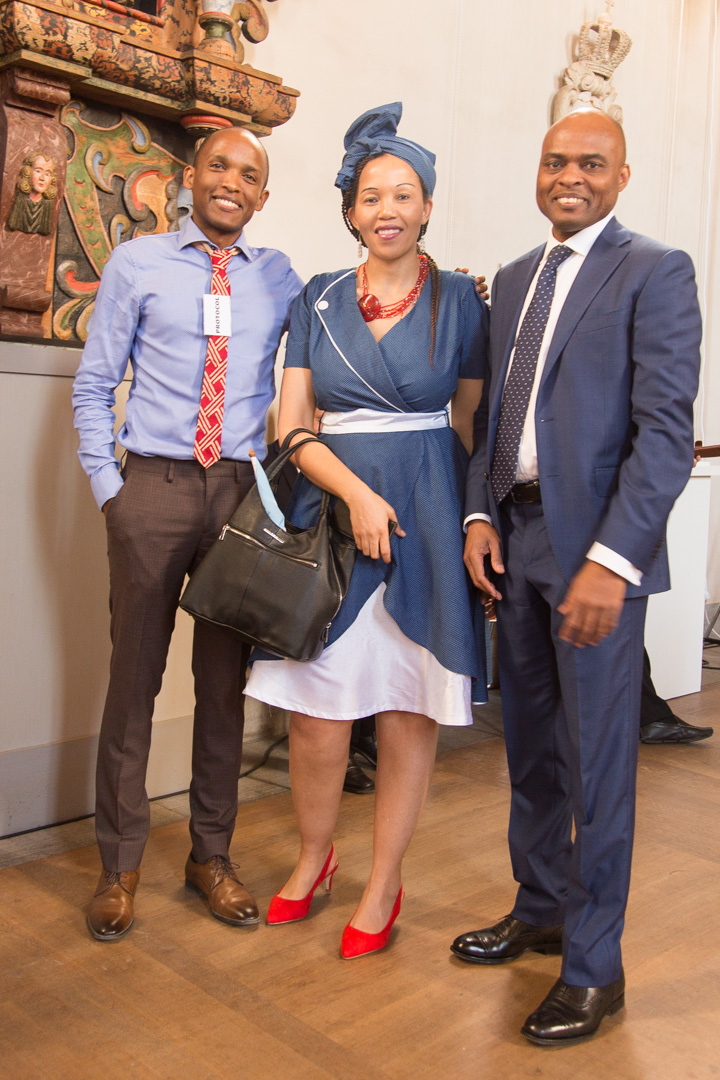 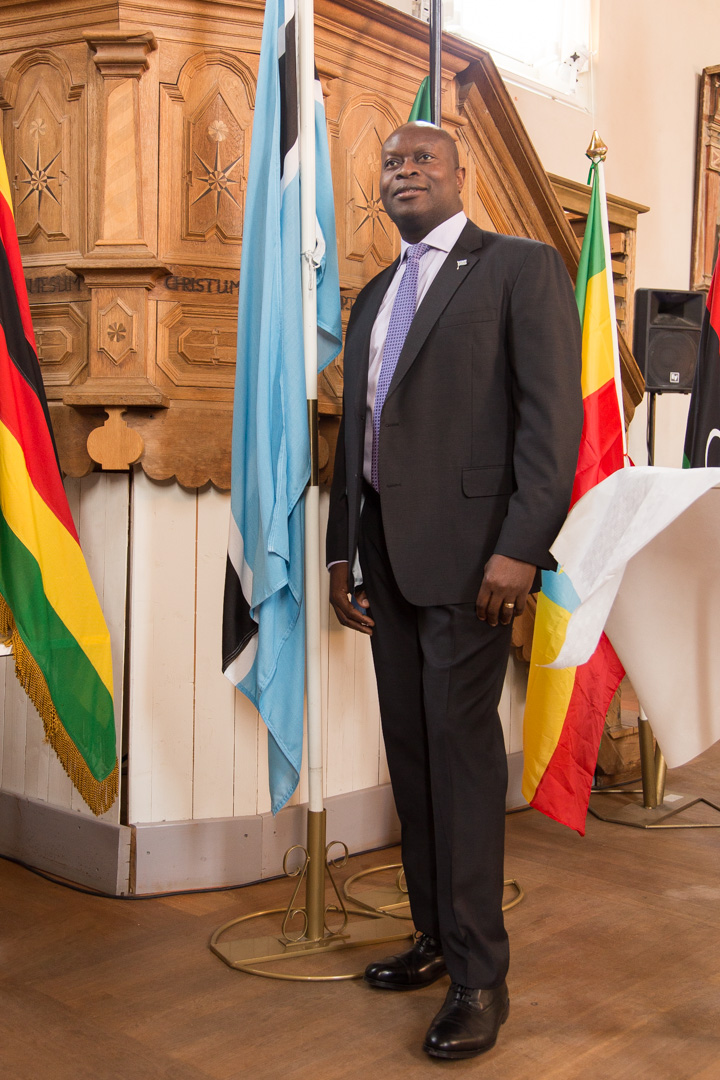 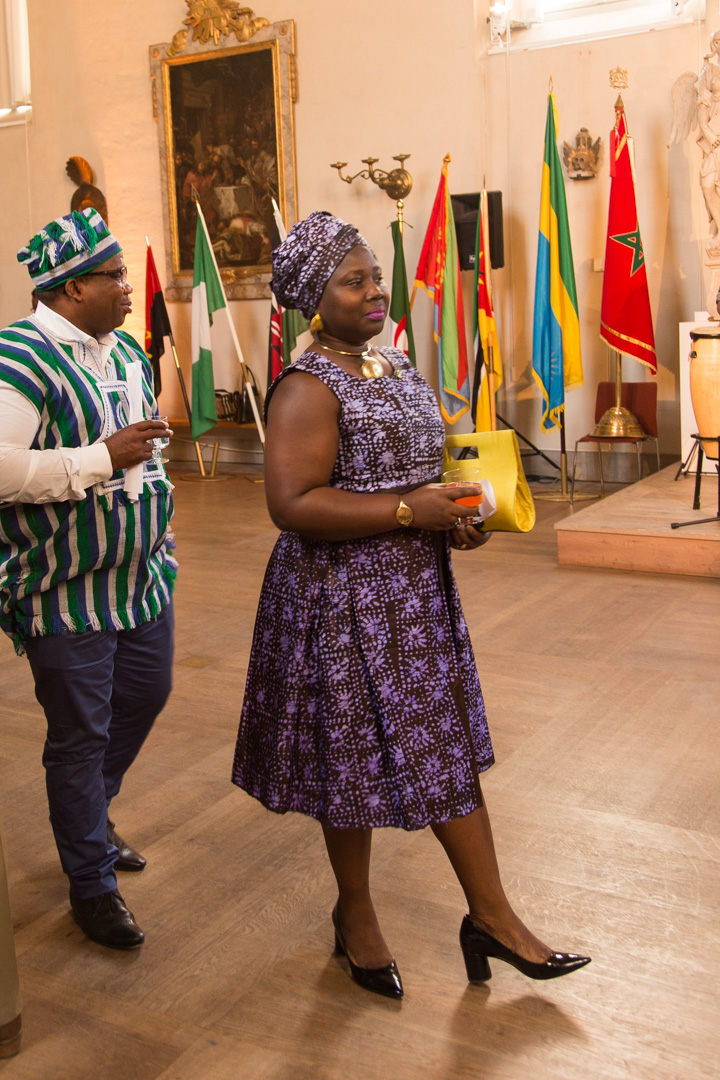 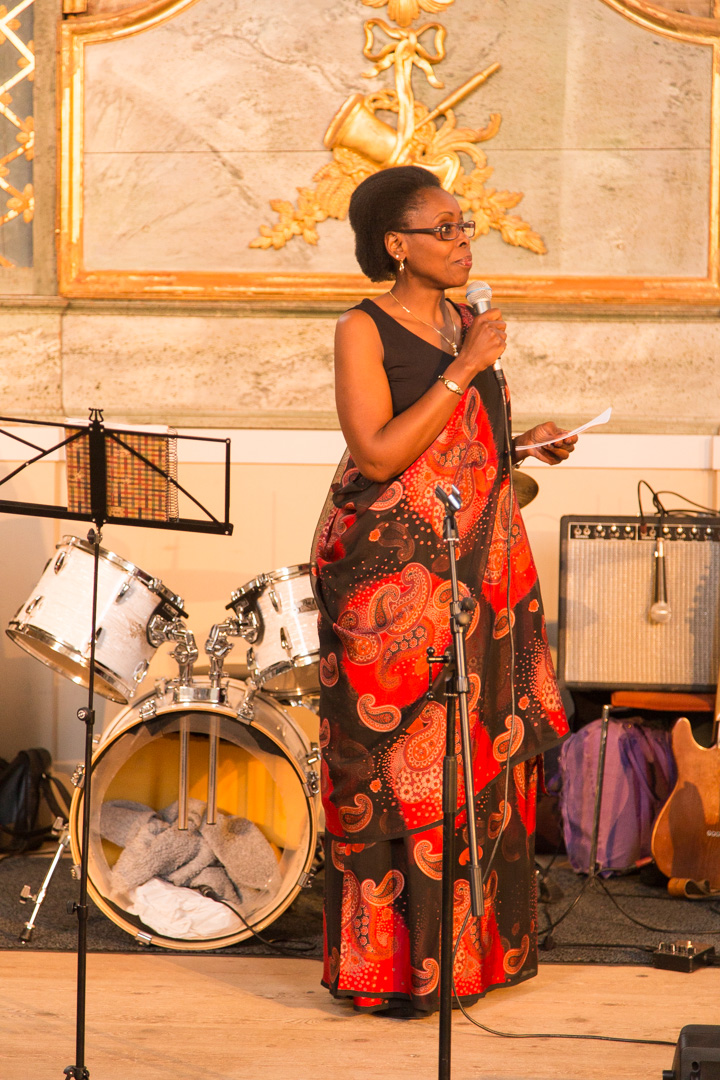 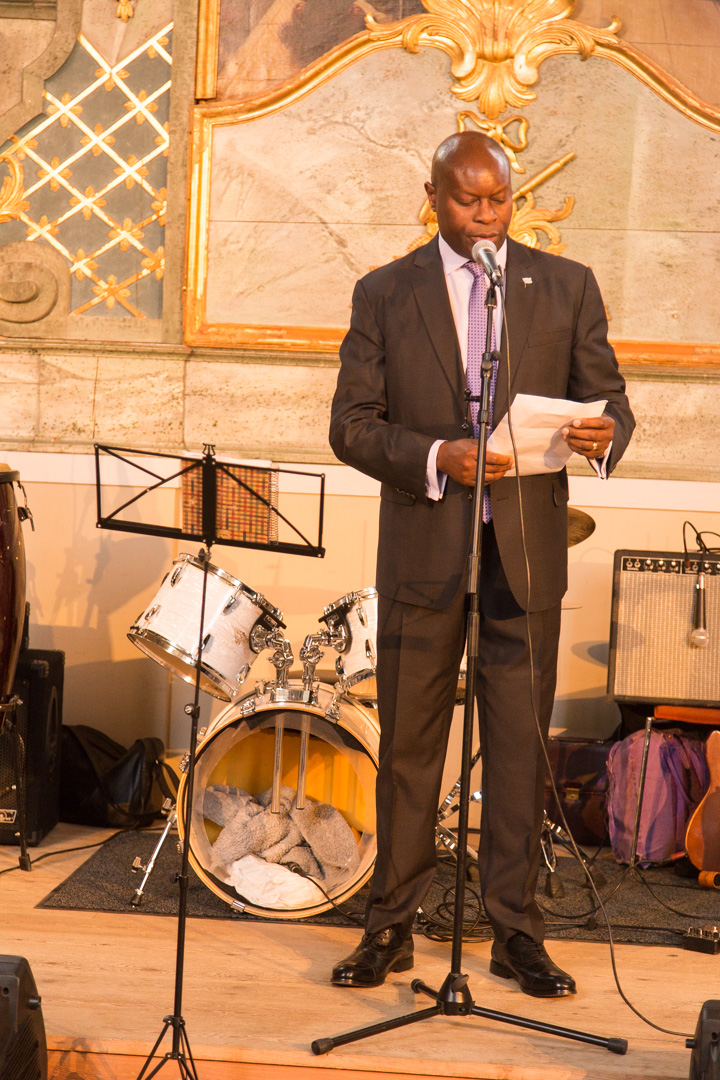 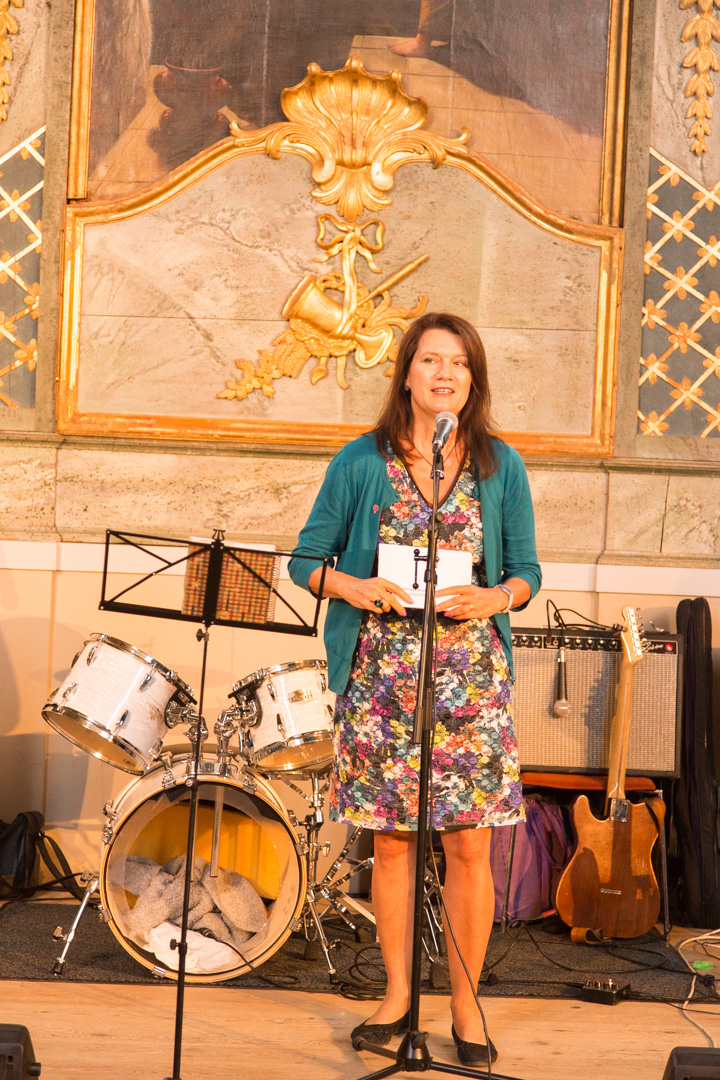 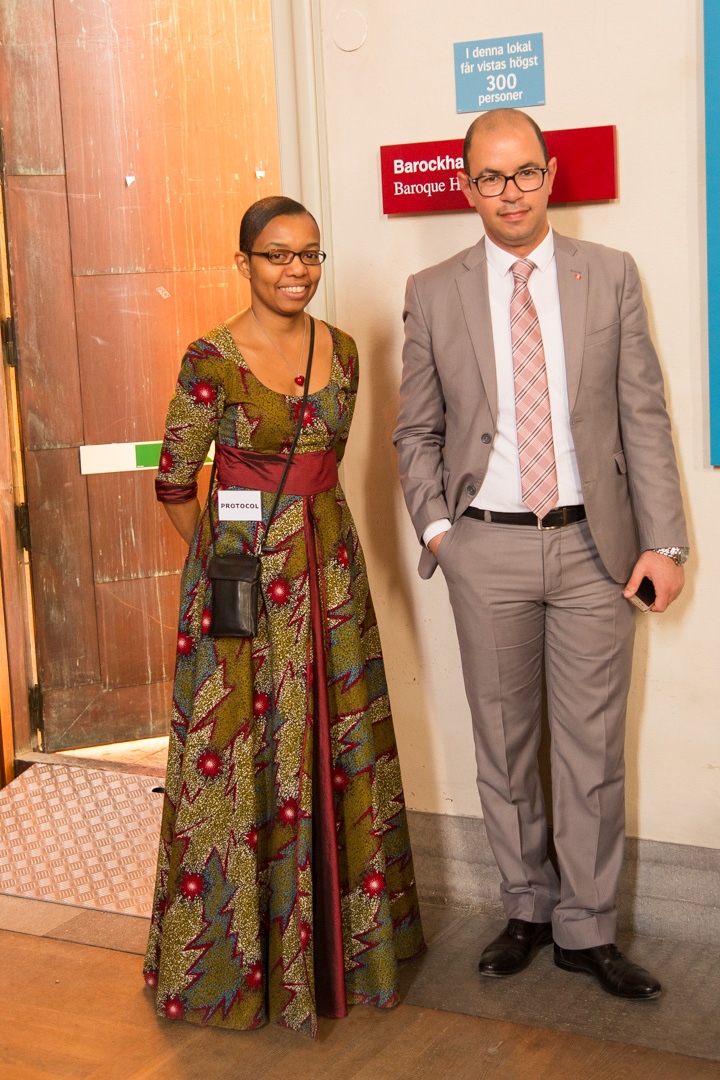 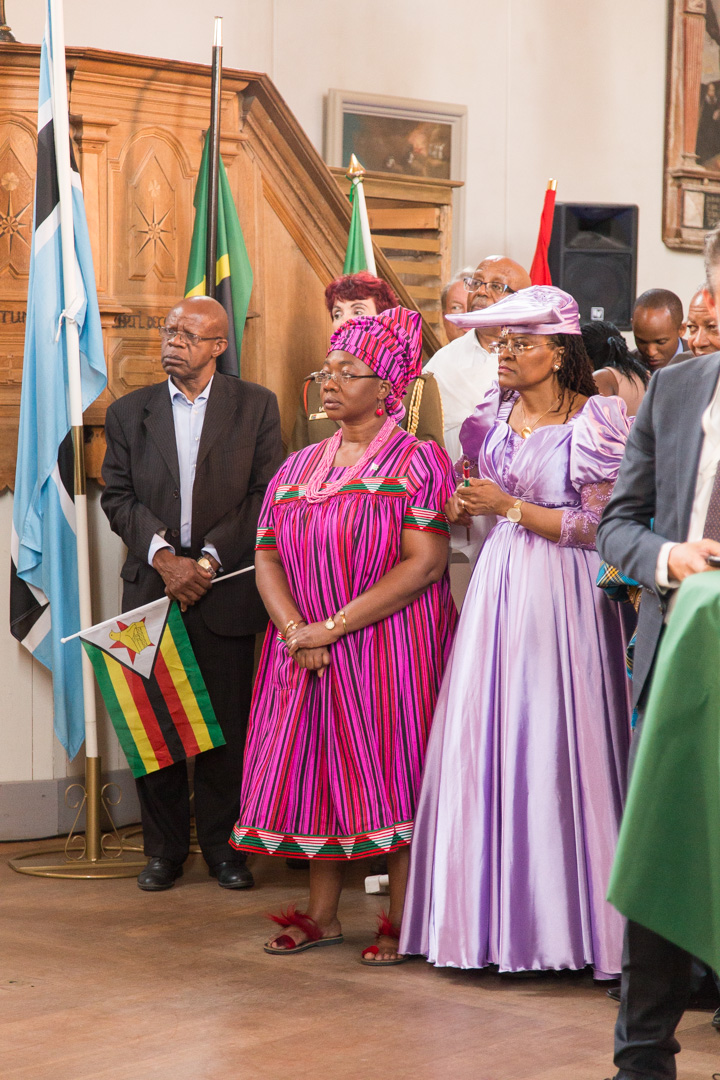 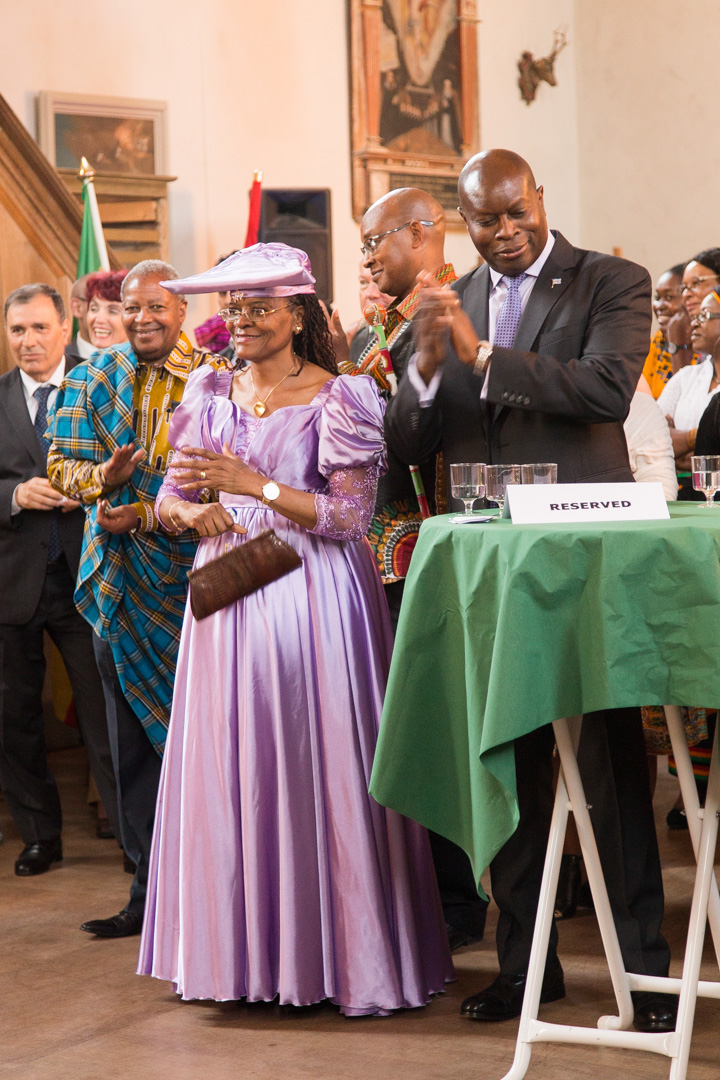 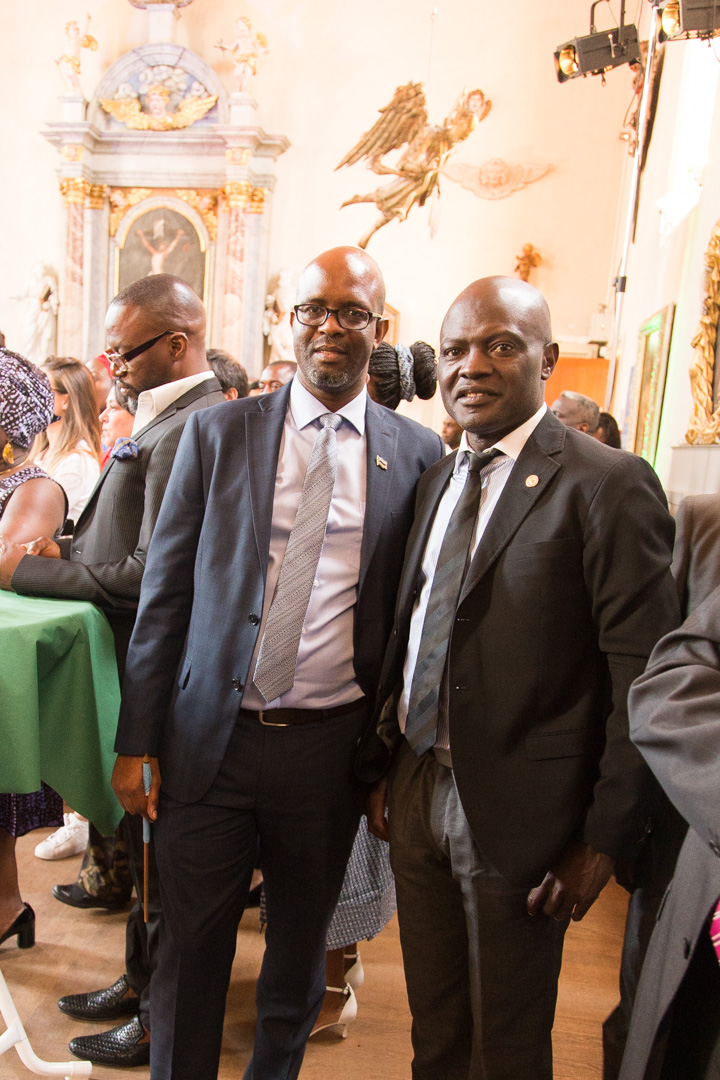 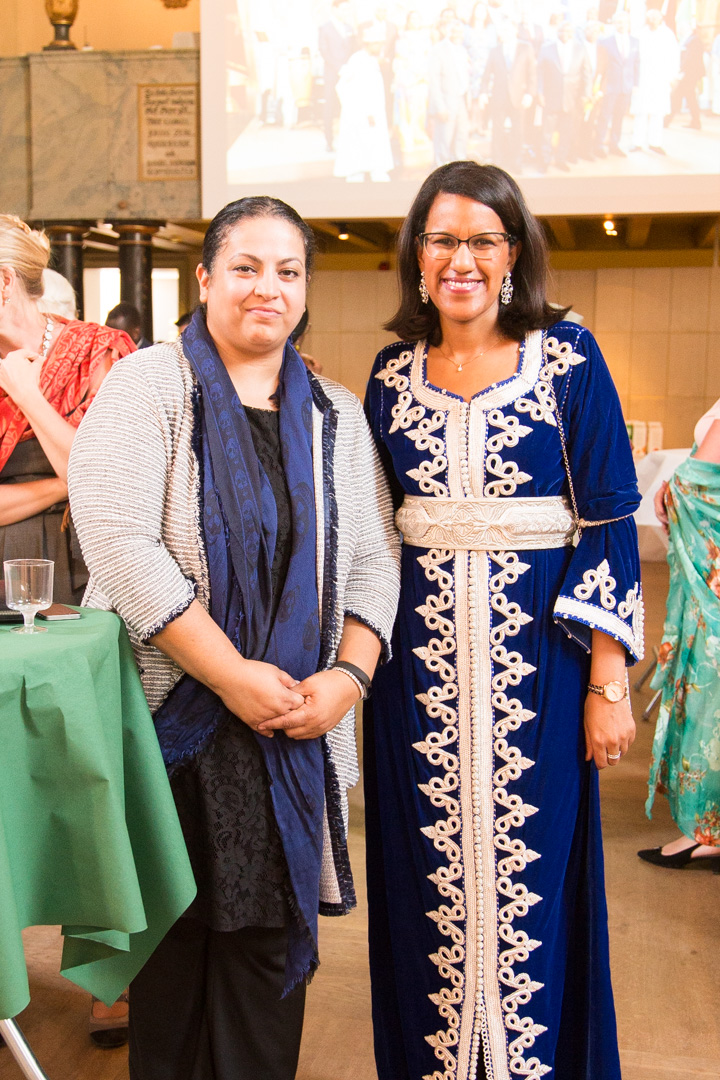 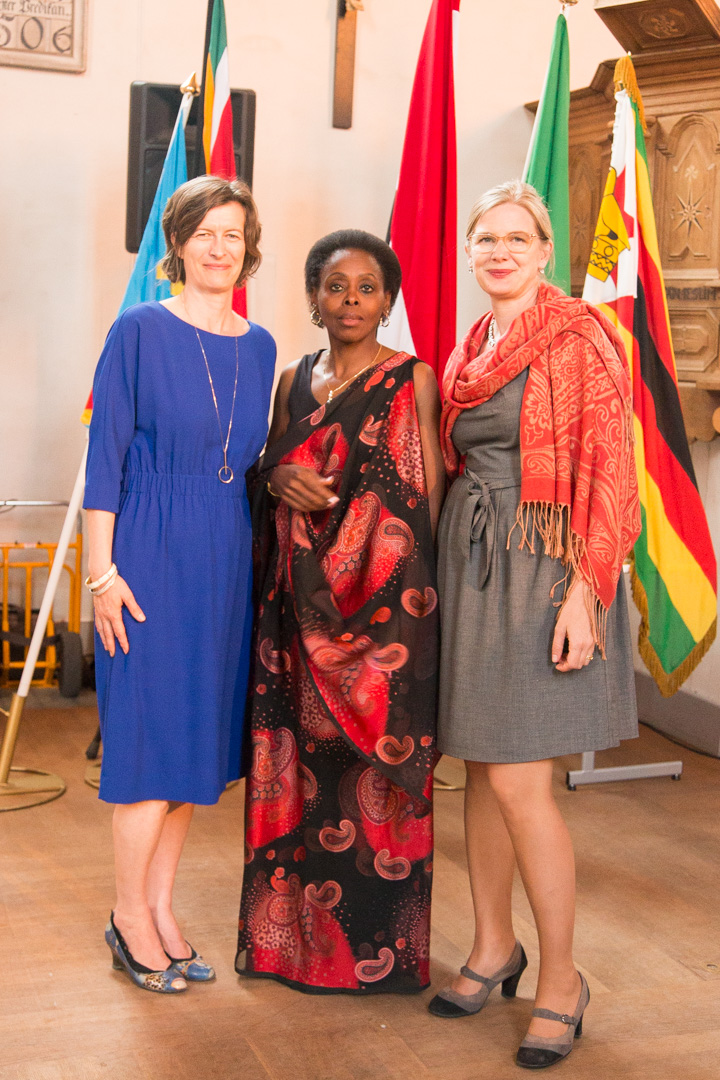 AI-TV conducted interviews with some Ambassadors. We interviewed the Dean of the Group of African Mission in Sweden, H.E. Mr.  Lameck Nthekela, Ambassador of the Republic of Botswana, HE Mrs. Ann Linde, Minister for EU Affairs and Trade and H.E Mrs Amina Bouayach, Ambassador of the Kingdom of Morocco to Sweden,

Footage of the speeches, interviews and traditional dance performances will be published here and on our YouTube channel. Stay tuned for more on our network.