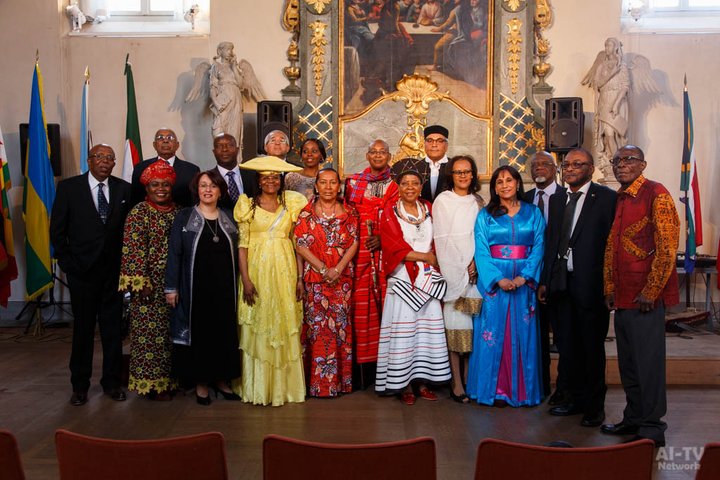 Commemorating the founding of the Organization of Africa Unity (OAU) an organization which is today known as the Africa Union (AU) has grown to become an annual event worldwide. Each year, all African Diplomatic Missions abroad honor and commemorate the day during the month of May in remembrance of the actual founding date, the 25th of May 1963 in Addis Ababa. This year marked the 54th anniversary of the Africa Day.

In Sweden the event is annually organized by a collective of all the twenty one Embassies of the African continent in Stockholm and headed by the Dean of African Ambassadors in Stockholm, Sweden. This year’s edition of the celebration took place on the 23rd of May 2017 at the Historical Museum in Stockholm Sweden. The theme for this year was ‘Harnessing the Demographic Dividend through investments in Youths’ with special attention to young people from migration in Sweden.

The ceremony brought together all the African Diplomatic Head of Mission in Sweden, Embassy staffs, members of the Swedish government, guest speakers, educational institutions interested in African affairs, non-governmental organizations, traditional African musicians as well as individuals from different works of life who joined to celebrate the day. The day was marked by speeches from the Dean of African Ambassadors in Sweden followed by the invited guest speakers, traditional dance performances from Morocco, Rwanda, Mozambique and South Africa. 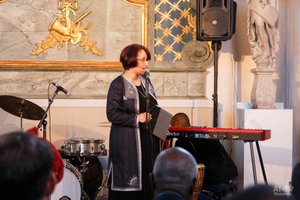 Before the speeches, the Swedish National Anthem was played, followed by those of the African Union. The Master of ceremony HE Ms Fatma Omrani Chargui, Ambassador of the Republic of Tunisia then asked everyone to stand still for a one minute silence in honor of those who were killed in terror attacks in Stockholm city and in Manchester, the UK.

An opening speech during the ceremony was given by the Dean of the Group of African Mission in Sweden, HE M. André Hombessa, Ambassador of the Republic of the Congo on behalf of all accredited African Embassies in Stockholm. In his speech, the Dean extended his thanks to the historical gesture of the founding fathers of what is today known as Africa Day and to all the countries that ‘meet regularly to work together towards a better future and to solve the common challenges’. In his speech, the Dean said this year was a year of Unity where the African family is finally reunited with and the return of the Kingdom of Morocco to the institutional family on the 31st of January 2017 in the Africa Union. 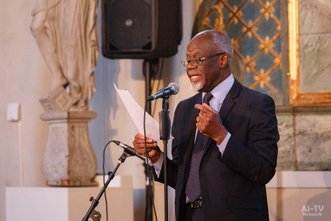 The Dean in his speech insisted that the African Union is aware of the challenges facing young people and African greatest assets is the youths and through their active participation, Africa can overcome these challenges because they are partners for sustainable developments and prosperity with unique contribution to future development.

Speaking about the young people in the diasporas, and the rights to live abroad, the Dean said they have ‘strong commitments’ to enable young people to study and work in states parties, promote skills which will be valuable to solve African problems, facilitate and collaboration with youths organization in their home countries to derive mechanisms that will encourage and facilitate their return and integration and engagements in developmental activities within the African societies. He also mentioned the presence of Ms. Cecilia Gärding and others with African origin living in Stockholm as a testimony to the ‘vivacity of our African youths in Sweden and extended his thanks to the kingdom of Sweden for the support and its openness to ambitious young Africans.

Ending his speech the Dean said ‘Africa Day is a time to celebrate the endless wealth of culture as African, no matter which part of the continent, with friends’ trough manifestations around the world’ and he also thanked all who dedicated their time to make this year’s celebration a success.

In her speech she said Sweden’s commitments and engagements with Africa states and African citizens remain strong. She also mentioned Sweden’s partnership and more importantly friendships were based on historic ties and are still being strengthened day by day.

Highlighting Swedish membership at the United Nation Security Council for the 2017-2018 terms and the election, she said were based on Sweden’s foreign policy, solidarity and to global commitments and that Sweden is grateful for the strong support for their membership by many African states. This occasion she said was an opportunity to thank African states for the support. 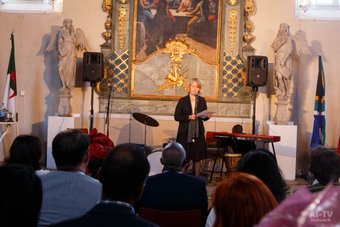 HE Ms Ulrika Modéer, State Secretary to the Minister for International Development Cooperation and Climate Guest of honor gave her remark on behalf of the Swedish government.

During her speech she said regional cooperation and regional integrations were essential for unlocking Africa’s economic and social developments. For this reasons she said that Swedish government has developed a new and long term strategy for regional development in sub-Sahara Africa 2016-2021. The strategy she said were aimed at providing additional support for strengthens capacity to face challenges and opportunities in the different region.

She also mention the up-coming 5th EU-AU summit which will be taking place in Ivory Coast this year and this will also be an opportunity where Sweden intern to forge their partnership and strengthen the already existing relationship with Africa.

As for the theme of the day, harnessing the demographic Dividend through investments in youths, and looking at the rights of youths she said was a very essential because it will empower the youths and the society. Furthermore she said providing the youth’s skills they need help education but also decision making about choice in life.

Another guest speaker, Cecilia started her speech with addressing the situation for the African diaspora youths and how positive changes can be created to lift up youths in Africa. She gave a brief description on her own journey to life as a child in apartheid South Africa mixed race with Zulu and British background, challenged the image of who has the rights to public places in South Africa, to become a diaspora youth with immigrant background in Sweden where there was also racism. Passing through these challenges, she said made her strong 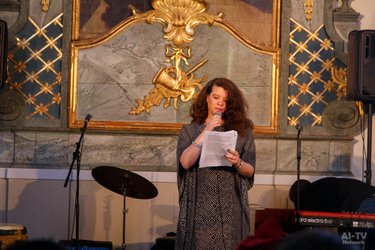 and she decided to become an ethnologist, political scientist, activist and working against racism of all forms. She also mentioned how all these challenges she faced became a life mission for her to use she talents to highlight how racism impacts on human relationships.

A question she asked herself was on how other diasporas with African background in Sweden are pursuing their dreams and be engaged with the situation back in Africa. With her talent and inspired to give back to the youths, she said she took an initiative to create a book about being African Swedish in 2010.

their potentials. One suggestion she proposed during her speech was a project called afropeanership (the African diaspora entrepreneurs) sponsored by Sweden where she teaches youths how to develop business ideas. This project and more she is doing were all sponsored by Sweden and she said she had noticed that Sweden has changed to the better.

Two young Moroccans wearing the traditional dresses called djellaba, with colorful long, loose hooded garments with full sleeves, moved the crowd with their amazing rock influenced band. The band leader, Khalid Badouli with origin from Marrakech, is a young Moroccan who masters the music arts and tradition of the Gnawa heritage. His music has a rich repertoire of well preserved African Islamic music that combines poetry, tradition and dancing.   Khalid Badouli and his band have performed in various music festivals in Morocco, the US and also in different part of Sweden where he lives presently.

The Inganzo, most arguably an acclaimed and amazing traditional dance from Rwanda that portraits the beauty of the long honed cow which is also the most reserved animal in the country. A group of Rwandan Women in Association in Sweden performed the Umushangiriro/Umushayayo, the dance of women during Africa day in Stockholm Sweden. Their performances during the event were quite charming and the ladies used their body gestures during this special occasion to promote the Rwandan culture. 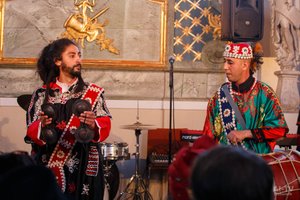 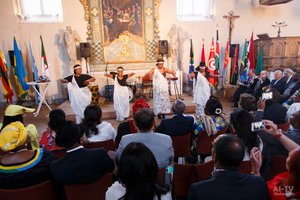 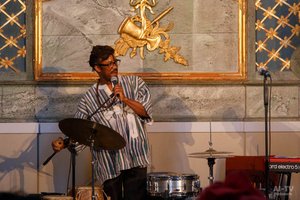 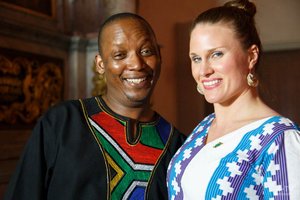 Another traditional band group during the event was Celso Paco & Kuvumbana. The band leader Celso Packo is a multi-instrumentalist (traditional instruments), folk song singer as well as a story teller from Mozambique. He also sings and plays musical instruments from Zimbabwe and South Africa. Celso Paco & Kuvumbana has a long experience in performing Mozambique songs in different countries in the Nordic countries and the members of the group are drawn from Mozambique and Sweden. The group got their inspiration from different dances in the southern African region. Performing during Africa day, the group showed their different talents, stiles related to South African Zulu dance plus those of Swaziland with violent shouts and chorography by the dancers.

The Madiba Jazz Ensemble, which is a Stockholm based, South African Jazz band. The band is established by its leader, Mzwakhe Hlatswayo, a multi-instrumentalist from Johannesburg who now lives in Stockholm Sweden. The band has their influences from great musicians like Miriam Makeba, Brenda Fassie and many more. Their aim is to embrace the South African music heritage dating back from the 50s to present day popular music with the ambitions of becoming the ‘Ambassadors of southern African music in Europe’. Members of the band includes; Mzwakhe Hlatshwayo, Pianist, Vocals and band leader (South Africa), Anna Louise Andersson, Lead Vocals (Sweden), Jens Nilsson, Tenor, Saxophone (Sweden): Robin Molin, Bass (Sweden) and Oskar Mattsson, Drums (Sweden). The bands performances during Africa day made the crowd dance through their popular South African chorography.

At the end of the ceremony, a closing remark was given by H.E Lameck Nthekela, Ambassador of the Republic of Botswana.

In a concluding remark, the Botswana Ambassador said youth stands for dreams, innovation or in simple terms ‘the future’. He said he was so impressed with the efforts that various governments are doing to get rid of youth unemployment by involving them in different projects. He also mentioned that their dreams were to see African children and youths being fully engaged, unemployment being eliminated and youths having accesses to education and trainings that will lead to employment. 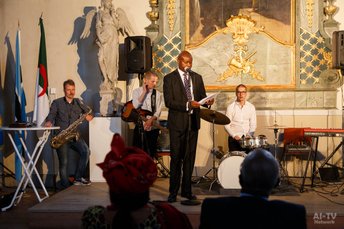 In his speech he mentioned how the host country Sweden has been involved in the development of the continent, how that could be visible with the strong bonds between Sweden and the African Union with both parties helping each others in critical issues.

The ambassador also thanked the invited guests for honoring the invitation, the historical museum for having provided the space for the event and the organizing committee for working tirelessly for making the event happen. He also extended his thanks to the African artists and everyone who attended the event.

AI-TV conducted interviews with some Ambassadors. The Tunisian Ambassador HE Ms Fatma Omrani Chargui who was also the Master of ceremony told us about her general impression of the day and being part of the organizing committee. The Moroccan Ambassador HE Amina Bouayach spoke about Moroccan Youths, and one of the guest speakers Ms. Cecilia Gärding talked about African youths in the diasporas.

Footage of the speeches, interviews and traditional dance performances will be published here and on our YouTube channel. Stay tuned for more on our network.