Each year during the month of July (30th), citizens of Morocco draw together to commemorate the Feast of Enthronement of His Majesty King Mohamed VI. Reasons behind this celebration could be as part of bringing the Moroccans together and to promote loyalty to the King who unites them. This year marks the 20th anniversary since His Majesty King Mohammed rose to power. The celebration is usually organized at home (in morocco) by the Moroccan government and abroad by the Moroccan Diplomatic heads of Mission. 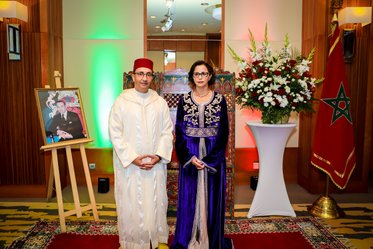 In Stockholm, Sweden, the ceremony of the Enthronement was organized by the Embassy of the Kingdom of Morocco under the leadership of the Charge d’Affairs of the Embassy, Mr. Mahfoud Bahbouhi and Mrs. Nadia Aiboudi Bahbouhi. The event took place on the 30th of July 2019 at Sheraton Hotel in Stockholm.

Attending the event were some Diplomatic Heads of Mission, members of the Swedish government, the entire Moroccan community in Stockholm, Sweden, civil society organizations, friends of Morocco and a special ‘guest’ of 23 young Moroccan players from Casablanca, between 10 and 14, who were currently participating in a football tournament in Stockholm.

The celebration in Stockholm was marked by a speech from Charge d’Affairs of the Embassy, Mr. Mahfoud Bahbouhi followed by a special Moroccan buffet and traditional dance from a prominent Moroccan band based in Stockholm, Sweden

The celebration of the enthronement of His Majesty the King of Morocco is always accompanied by speeches from the King Mohammed VI in Morocco and all the Moroccan Diplomatic Missions abroad.

Back home in Morocco, King Mohammed VI during the ceremony gave an opening speech. During the event, King Mohammed told his audience (the entire nation) how twenty years have elapsed since the almighty God entrusted him with the sacred duty of leading the nation. He insisted during his speech that, the position was one with an immense trust and with ‘heavy responsibility’ and that he (King Mohammed) made a solemn commitment to the people of Morocco and to the Almighty God to ‘work earnestly’ so as to fulfill the trust. In his own words, the King Mohammed VI said ‘As God is my witness, I have not - and I shall not - spare any effort to serve your best interests and your just causes’.

In his speech, the king insisted on the fact that not all citizens feel ‘positive impact on their living conditions or helping to meet their daily needs and social services’. In responds to these challenges faced by some citizens, the king said ‘God knows how much I suffer personally when a fraction of the Moroccan people - even if it were just one per cent of the Moroccan population - endures hardships and lives in poverty. For this reason, I have attached particular importance to human development programs, social policies and the need to respond to Moroccans’ pressing concerns. As I said in last year's address, there will be no peace of mind for me so long as we have not properly tackled the hurdles faced and found the right solutions to development and social issues’.

In his closing remarks the King said ‘The celebration of the glorious Throne Day is a most fitting occasion to reiterate our unwavering commitment to the Moroccanness of the Sahara, to our national unity and territorial integrity, and to full sovereignty over every inch of the Kingdom’s territory.

I am proud of all that our country has achieved at the United Nations and at African and European levels. We need to remain mobilized across the board to consolidate these achievements and face up to the plots of our adversaries. Morocco remains resolutely and earnestly committed to the political process, under the exclusive aegis of the United Nations Organization’.

Speeches by Mr. Mahfoud Bahbouhi, Charge d’Affairs, Embassy of the Kingdom of Morocco in Sweden.

In his welcome speech, Mr. Mahfoud Bahbouhi, ‘It is a whole symbolic day as we celebrate the twentieth anniversary of the accession of HM the King Mohammed VI to the throne’ and that they (the Moroccan people) celebrate the transformation of the country (Morocco). He said the reign of His Majesty was a new milestone in the history of Morocco, a country that is more than fourteen centuries old.

Mr. Mahfoud said during the past twenty years, ‘the social, economic and political dynamic released energies to make our people more creative, while the action, leadership and influence of Morocco in the concert of nations, are more and more consolidated. 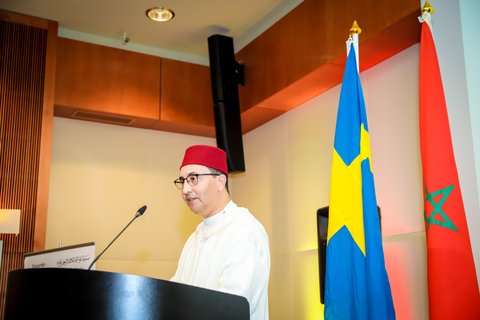 He added that ‘under the reign of His Majesty, Morocco is determined to maintain the pace of performances and face the challenges of our time. And that is what explains this Moroccan particularism, without pouring into unnecessary complacency’.

As an example of a smooth transformation in Africa and the Arab world, Mr. Mahfoud quoted Morocco as a strong and more determined country that have met some of the challenges of socio-economic developments, good governance and democracy as well as migration and climate change.

In his concluding remarks, Mr. Mahfoud said; in his own words that for the past twenty years, ‘Morocco has become a country where it is good to live, where it is profitable to invest and launch business. An island of stability, where millions of people from all over the world choose to visit, to taste a legendary hospitality and enjoy a rich culture that reflects the contribution of all the components of our society and our identity as Arab, Amazigh, Muslim, African, and Mediterranean. A country with exceptional geostrategic position on the crossroad between the Arab world, Africa, and Europe, at the gate of the Mediterranean and facing the Atlantic Ocean.

A group of 23 young Moroccan football players from Casablanca, with ages between 10 and 14, who were in Sweden to participate in a football tournament in Stockholm, also attended the ceremony as gusts. Mr. Mahfoud quoted their presence (Moroccan team) as a kind of ‘people-to-people cooperation and relations that exists and needs to be encouraged between Morocco and Sweden’.

Below are some photos and video footage from the event provided to us by Ammar Saad, a filmmaker and photographer from Teeh picture through the Embassy of the Kingdom of Morocco in Stockholm, Sweden.